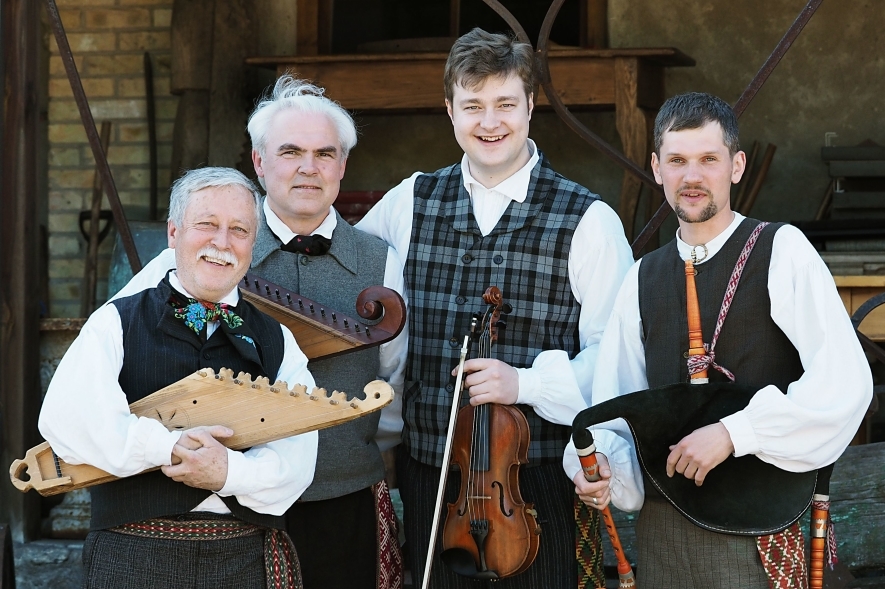 The Lithuanian Folk Music Band Sutaras is an independent, professional folklore group. You will find the whole range of Lithuanian instrumental folk music in its repertoire: from old rituals, authentic shepherds’ instruments dating to the end of the 19th Century, to the international and classical instruments that became increasingly more common in the villages of Lithuania by the beginning of the 20th Century. During a Sutaras concert you might hear a unique polyphonic sutartine (round) performed on daudytes (wooden horns), rageliai (horns), or skudučai (pan pipes). Or you might hear instrumental versions of songs or maybe even shepherd songs called raliavimas, which are performed with lamzdeliai (recorders) or rageliai (horns). Lively Lithuanian folk dances are played with violins, accordions, clarinets, cymbals, and a number of other instruments.

You will sense traditional village music coupled with the precision characteristic of professional musicians when you listen to the music of Sutaras. The artists do not only play instruments – they also sing, dance and often draw their audience into the whirlwind of their performances.

Every musician is adept at playing several different instruments, which allows the Band to be very diverse and to express the characteristic instrumental compositions of Lithuania’s different regions.

Since its first public performance on 30th of December 1988, the Folk Music Band Sutaras has participated in over 6200 performances, which ranged from concerts, dances, and television and radio programs to performances at festivals, exhibitions, and other festivities. The music of Sutaras has resounded for listeners in many Lithuanian cities and villages, delegates at conferences and meetings, quests and tourists. Thousands applauded Sutaras at the 1991 PORTA festival in the Czech Republic, at the well-known Skagen festival of Denmark in 1992, again in 1995, at Rudolstat, Germany in 1994, and at Mistelbach, Austria in 1995. The citizens of Washington, DC swirled among the waves of dancers when Sutaras played at the Smithsonian Folklife Festival in 1998, as did the onlookers in Queensland, Australia during the 1998 Woodford Folk Festival, as well as participans at Yilan International Children’s Folklore & Folkgame Festival in Taiwan 2006. The kings of Malaysia and Spain have heard the resonance of Lithuanian instruments. Scores of people attended the performances of Sutaras at Expo 1998 in Lisbon, Expo 2000 in Hanover, 2005 Aichi in Japan, 2008 Zaragoza (Spain) and 2010 Shanghai (China). Participants were impressed at Lithuanian Festivals in Australia (Melbourne 2004 and Sydney 2008), performances at the Festival of Baltic States in Iceland, shows in Italy, Germany, Poland, Belgium, Holland, Finland, Austria, Luxembourge, Spain, Ireland, and at many Festivals and performances in North America. They represented Lithuanian traditional culture at the Cultural NYTORV event in Copenhagen 2002, the Day of Europe in Athens 2003, and many years participating at the Berliner Messe “Grune Woche”. These are but a small part of the sound, video and press articles documenting the Band’s creativity which became daily life for the musicians in the Band. SUTARAS performed Lithuanian melodies heard live over the radio (during two-hour performances) by the citizens of the Netherlands, Australia and Euroradio, among others. Fans of Sutaras exist in many countries of the world and you will find Sutaras recordings in many prominent radio stations and private collections.

The Band’s musicians do not evade experimentation and are constantly in search of ways to capture the interest of their audience while showing the unique nature of Lithuanian traditional folk art.

The artists of SUTARAS and musicians of the Vilnius Jazz Quartet have arranged and recorded a CD “Ethnojazz.lt” which was performed at the Frankfurt Book Fair in 2002, the Birštonas Jazz Festival in the same year in Lithuania, and for listeners of Euroradio. In 2004 SUTARAS became the winner of the prestigous Lithuanian award for traditional culture, “Golden Bird”. Spring of 2006 was marked by the joint Folk’n’roll Project “Vilnius on the Palm of Your Hand” with the Dainius Pulauskas Group – Lithuanian jazz “Gold Disc” winner, recorded on CD and performed in Spain, Belgium, the Jazz Festival in Klaipėda and other cities in Lithuania. SUTARAS discography consist of 13 CD’s and 3 DVD.