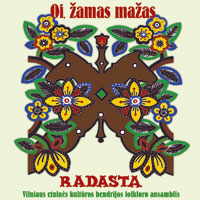 Radasta – an amatour folklore group gave first performance in 1981. The group has been very active since very first days of its existence, has given many concerts at schools, enterprises, exibitions and fairs. At present Radasta can boast a wide repertoire collected from both folklore archives and country people whom they meet during expeditions to various districts. The group participates at annual local festivals, represented Lithuania at the World Folklore Festival in Canada 1990, Christmas performances in the Netherlands, Folklore festivals in Switzerland, Germany, Portugal, Turkey, Finland, France, Russia, Romania.