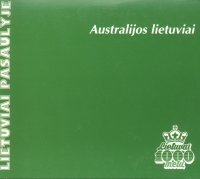 The compact disc, which is devoted for the thousandth anniversary of mentioning of the name of Lithuania, contains the compositions performed by solo-singers, ensembles and choirs of Lithuanians residing in Australia. The basis of their repertoire is folk music, transformed folk songs and original compositions of Lithuanian composers. Concert recordings from the Song Festivals of Australian Lithuanians, studio recordings as well as 28-page booklet in lithuanian about the performers included.