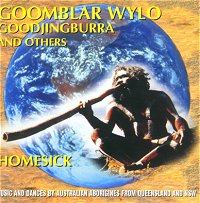 We are proud of this compact disc, which starts a new series called “Musical traditions of the world”. The repertoire of Goomblar Wylo, Australian aborogine artist, stands out by the variety of musical scenes, exhaustive introduction of dances and other syncretic forms of art as well as by sincere communication with the audience. Together with other musicians Goomblar Wylo demonstrates high skill in blowing a didgeridoo, introducing the formulas of primitive polyrhythmic and a unique Stone Age culture, in his concert and studio recordings. A 12-page colourful booklet in English about aboriginal culture, performers and repertoire.